Inside the box's cover is a 30-stanza hand-written illustrated poem telling the story of the art, which incorporates the colorful creatures at the top of this page and is appropriate for all ages.

Nicole is primarily self-taught, but it is important to recognize that no one is truly 100% self-taught in any way. We are all inspired by something, somewhere, in some way, and it's up to us to create something from the interwoven web of inspiration and how it finds us. She draws her art by hand and loves the mass production of hand-drawn art via all available channels from self production to product licensing.

She is inspired by the extraordinary and endless shapes & colors in the greatest work of art- Nature and Earth: Insects with their bold psychedelic bodies, deep shadows that change color or disappear with the sun, leaves in unending shades of green, rainbows hidden inside rocks (yes, if you crack open ordinary rocks, there are often whimsical colors glowing inside). Everywhere you turn is a miracle of art and engineering which she believes is created by God to inspire us humans to create our own work, in all formats, and Nicole is infinitely inspired by its beauty and intricacy.

During college at Drew University, she created a self-designed major called the Social Theory of Creative Enterprise, combining business, sociology, and writing, under the mentor-ship of Sociology Professor Jonathan Reader. After taking 2 art courses, she realized that she'd rather create art in her own style rather than on assignment. From then on, she diligently used her spare time to draw illustrations and accumulate a rich body of work. In fact, many of the illustrations in The Poster Box!™ were drawn during college.

(During one of her early art courses, an assignment was to create a collage using pieces of paper only cut in straight lines and arrange the pieces in the shape of a flower. Nicole didn't think straight lines were the most attractive way to represent the flower so she cut her pieces in curvy shapes instead. Upon admiring her final collage, the professor, William Mutter, said, "Well, you didn't follow the instructions but it's so pretty I just can't tell you to do it over!").

During college, she also drew numerous pieces which were chosen by campus committees to be mass printed on shirts and bags for annual events. It was fulfilling to see people walking around campus wearing her art. She also had the privilege of hand-addressing calligraphic mailings for former New Jersey Governor and then-president of Drew University, Tom Kean.

In addition to art, she studied poetry under Professor Suji Kwock Kim and continues to write. Nicole is currently working on several writing-related projects.

Nicole also found a creative connection with photography starting shortly before high school and continuing to present day. Various projects have included professionally photographing a wedding, and photographing bands and musicians during live shows as well as staged photo shoots for press and marketing purposes.

She also led a 3-hour workshop during college at the Great Swamp Wildlife Refuge in Chatham, New Jersey, titled "Ordinary People; Extraordinary Photos". The workshop included photography instruction on composition and technique as well as time in the field. It was accompanied by an exhibit of Nicole's mushroom and fungi photography at the Swamp.

After college, she worked for Universal Music Group for roughly 4 years as the Sales & Marketing Coordinator for Universal's Special Markets division, which creates custom branded music CDs, downloading promotions, and other projects for national retail chains, independent retailers, and brands of all types looking to incorporate music into their marketing programs.

There, she assisted the executive sales staff with their accounts and projects such as Target and Starbucks compilation albums and "Best Of" music collections sold at retail. She also managed a client base of her own, consisting of non-traditional music retailers including catalog companies, PBS distributors, and concert venue sales companies such as Thomas York and Concert Product.

She also conducted research on the master rights ownership of outside tracks being considered for licensing for Universal's projects, handled the reissuing of out-of-print albums to third party distributors, and is mentioned in the "Thank you" section of Liza Minnelli's 2008 release by Collector's Choice Music titled The Complete A&M Recordings. Nicole also organized numerous CD donations to hospitals and charity organizations while at Universal.

She spent her nights, weekends, and commuting time obsessively creating art for future projects and ultimately transitioned to doing art full time with the launch of her first mass produced self-published and self-distributed product, The Poster Box!™ - Magical Worlds at the New York International Gift Fair in January 2009.

In 2010, a textile collection titled Face The Music was released to the national and international over-the-counter fabric market. The idea was born when fabric company Elizabeth's Studio and Nicole met at the New York Gift Fair and they took great interest in her work. The collection was designed that year with Nicole diligently working on it for 6 weeks, and released in 2010 to rave reviews. It sold 15,000 yards.

Since then, Nicole designed 3 more fabric collections from hand-drawn artwork. All of art was created with markers, colored pencils, and occasional gen pens. She scanned the final illustrations and created intricate repeat patterns laid out as fabric designs. Those collections are titled "Sophisticated Sounds", "Melody Makers" and "Sonic Celebration." They can be seen & purchased by clicking their names at the top of this site.

Together, those collections showcase 18 detailed fabric patterns of interlocking designs made from one-hundred-and-twenty-one (121) main drawings and roughly thirty (30) smaller drawn pieces. Many of the fabric patterns are printed on 3-4 different background color choices, in small and large versions (as 8" and 4" repeat patterns), totaling 108 pieces of fabric. That's a whole lot of sewing possibilities!

Photos of her past projects can be seen by clicking "Past Projects" at the top of the page. "Like" our Facebook page for updates when new projects hit the market as more art is always in the works! 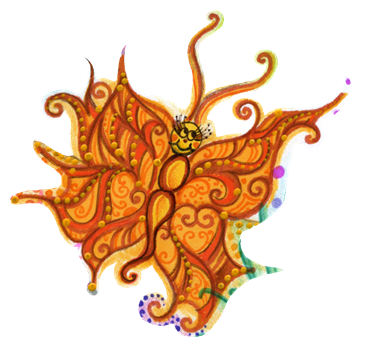